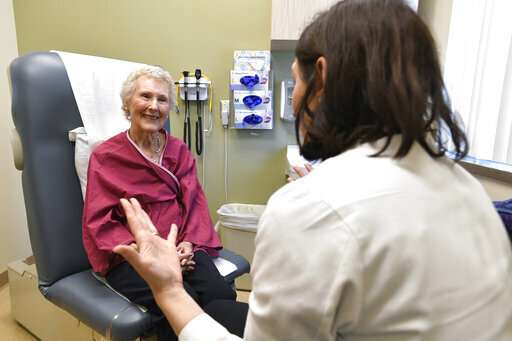 Before she could start breast cancer treatment, Nancy Simpson had to walk in a straight line, count backward from 20 and repeat a silly phrase.

It was all part of a special kind of medical fitness test for older patients that’s starting to catch on among cancer doctors. Instead of assuming that elderly patients are too frail for treatment or recommending harsh drugs tested only in younger patients, they are taking a broader look.

Specialists call these tests geriatric assessments, and they require doctors to take the time to evaluate physical and mental fitness, along with emotional and social well-being. They also take into account the patient’s desires for life-prolonging treatment regardless of how much time might be left.

An avid walker with a strong network of nearby family and friends, Simpson, now 80, says she “wanted to do the maximum I could handle” to fight her disease. She scored high enough in her 2017 evaluation to proceed with recommended surgery and chemotherapy.

“It gave me encouragement. Then I felt like I am OK and I can get through this and will get through this,” said Simpson, who lives in Fairport, New York, near Rochester.

These tests are sometimes done with other illnesses but only recently have been recommended for cancer. In new guidelines , the American Society of Clinical Oncology recommends the evaluations for patients aged 65 and up, particularly before making decisions about chemotherapy. The idea is to find ways to help patients tolerate treatment, not rule it out.

For example, if walking tests show balance problems that chemotherapy might worsen, patients might be offered physical therapy first. Relatives or friends might be called on to help cook for seniors who live alone and would become too weak to prepare meals during chemo. And for those who want to avoid the hospital no matter what, treatment that could put them there would be avoided. 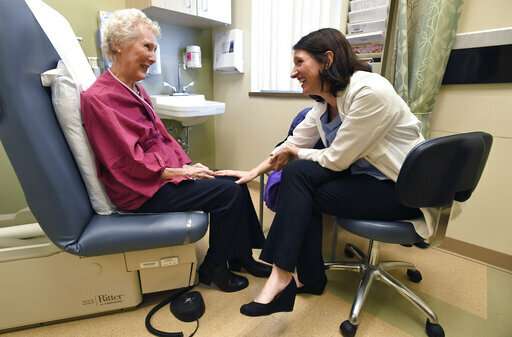 Almost 1 million U.S. adults aged 65 and older will be diagnosed with cancer this year, the American Cancer Society estimates. Nearly two-thirds of all cancer patients are in that age group. And yet, most cancer treatments stem from studies on younger, often healthier patients. That leaves doctors with limited information on how treatments will affect elderly patients. Geriatric assessments can help bridge that gap, said Dr. Supriya Mohile, a specialist in geriatric cancer at the University of Rochester Medical Center.

These tests may require 15 to 30 minutes or more and recent research has shown they can accurately predict how patients will fare during and after cancer treatment, Mohile said. Older patients who get chemo and have other health problems are more vulnerable to falls and delirium and at risk for losing independence.

“We hear all the time about ‘decision regret,'” she said, meaning patients who got harsh treatment but weren’t unaware of risks and other options and who say, “I wish someone had told me this could happen.”

Mohile co-authored a recent study that found just 1 in 4 U.S. cancer specialists did the assessments. She said doctors say it takes too long and that patients don’t want it. But she hears from patients and caregivers: “I’m so happy you’re asking me about these things. Nobody ever asked me.'”

One of Mohile’s colleagues did Simpson’s evaluation, which showed she was strong enough to endure a standard, aggressive three-drug chemotherapy combo for breast cancer. She chose a variation that was gentler but extended the treatment by several weeks.

The evaluation showed “I wasn’t in as that bad of shape as my age would indicate,” Simpson said.

Her walking buddy and four attentive children gave her strong social support, and she lived independently, doing her own cooking and cleaning. 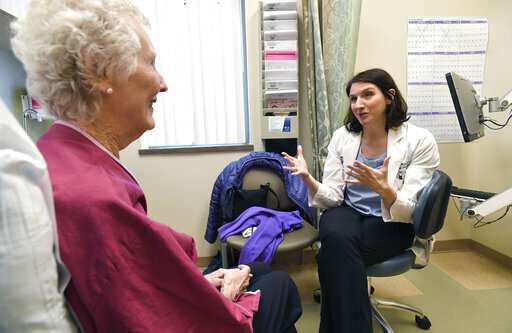 Treatment left Simpson with hair loss, fatigue and excruciating mouth sores. She knew about the risks but has no regrets.

Cancer “gave me a different perspective on what is important in life and what isn’t and I’m still adjusting to that,” Simpson said.

Dr. Hyman Muss, a geriatrics specialist at the University of North Carolina’s Lineberger Comprehensive Cancer Center says there’s no question the evaluations are important but insurance coverage is sometimes a problem. Medicare will pay for yearly physical exams but not geriatric assessments, he said. Doctors can sometimes squeeze the tests into other office visits, but there is no billing code for the exams, he said.

Advocates note that the evaluations can include questionnaires that patients can fill out at home to shorten time in the doctor’s office.

Beverly Canin, 84, of Rhinebeck, New York, became an advocate after declining chemotherapy following surgery for early breast cancer 20 years ago. She didn’t have an assessment, and says her doctor dismissed her concerns about harsh side effects and refused to consider other options.

A 2015 medical report Canin co-authored told of a patient who had the opposite experience. The 92-year-old man with rectal cancer entered hospice care after he declined surgery, the only treatment his primary care doctor recommended. The doctor determined the man would not tolerate rigorous chemotherapy and radiation because of his advanced age. A specialist approved the treatments after the man had a geriatric evaluation and declared he wanted care that would control his symptoms and prolong his life.

The patient managed well and was cancer-free two years later. Canin said his stress and treatment delay could have been avoided if a geriatric evaluation had been done first.