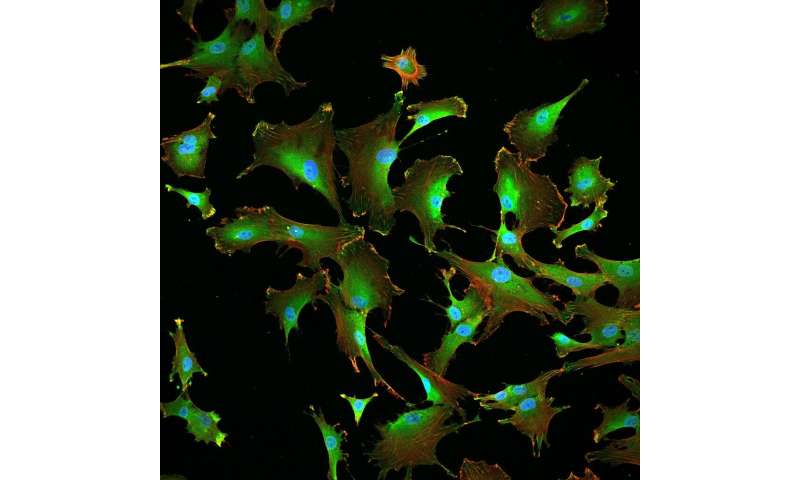 Tropoelastin, the raw material used to create ‘MeTro’ elastic surgical glue developed with the University of Sydney, has been found to encourage stem cell growth—with the potential to ultimately help the body repair itself.

Stem cells are vital for therapeutic treatments to repair and build human tissue including skin and muscles. Researchers are constantly looking for ways to make stem cells work better, with worldwide demand for the cells far outstripping supply.

Now researchers have discovered a way to generate more stem cells cheaply and quickly, using tropoelastin – a protein that gives living tissues the ability to stretch and retract.

Published in the Proceedings of the National Academy of Sciences of the United States of America (PNAS), co-authors Dr. Giselle Yeo and Professor Anthony Weiss – from the University of Sydney’s Charles Perkins Centre, School of Life and Environmental Sciences and Bosch Institute – said the study describes a new and cost-effective method of growing and recruiting mesenchymal stem cells rapidly and efficiently.

“Stem cells are increasingly being used as cell therapies for a range of diseases that cannot be reliably treated by conventional medicine including skeletal tissue injuries, heart attacks, degenerative diseases and organ failure,” Dr. Yeo explained.

“Unfortunately, a lack of supply is hindering widespread use of such cell therapies.”

“Such technologies can help significantly lower the currently prohibitive cost of many cell therapies.”

Tropoelastin is a key component of MeTro, the groundbreaking ‘squirtable’ elastic surgical glue that can seal wounds in 60 seconds when exposed to UV light, developed by Professor Weiss in conjunction with researchers in the United States. Professor Weiss won the Eureka Prize for Innovation in Medical Research for his development and commercialisation of tropoelastin protein biomaterials.

Using human stem cells from donors, the researchers found that when small amounts of tropoelastin were applied it encouraged more cells to be produced, creating a better environment for growth compared to other commonly used proteins for stem cell cultures.

“Stem cells need a home to live and grow, and we’ve essentially created a nice environment for them live in,” Professor Weiss said.

“Making stems cells requires a process a bit like cooking soup – the more complex the culture or ‘soup’, the more difficult it is to control the growth of the cells and the more expensive it is to make.”

“Tropoelastin also encourages other stem cells to join the ‘soup’ – further increasing the rate of growth of the cells.”

Professor Weiss said the next stage of research would be to test the efficacy of tropoelastin inside the body.