The discovery of pluripotent stem cells, which have the ability to differentiate into the huge range of different cell lineages that make up the human body, signaled the start of a new era in biological science and medicine. Although we are also now able to reprogram regular cells to exhibit this pluripotency, we still have much to learn about the different cues that lead such cells towards a particular cell fate, including the cells that make up the eye.

A new study reported in the journal Cell Reports has shed light on this by showing that, by growing human pluripotent stem cells on different forms of a protein called laminin, they can be induced to become corneal cells, retinal cells, and others. The cells could then be collected and used for a range of therapeutic purposes.

This study builds on earlier work by this Osaka University-centered group, which showed that exposing these stem cells to an isoform of laminin, a structural component of the matrix that fills the space outside of cells, led to the creation of cell colonies arranged as four concentric zones. Each of these zones exhibited characteristics specific to a particular anatomical component of the eye.

Here, the team grew these stem cells under conditions exclusively containing other laminin isoforms that are present in the eye, finding that this led to the creation of cells with different mobilities, densities, and tendencies to interact. They then showed that, for each particular laminin isoform, the different cells produced in the cultures matched those in different parts of the eyes of embryonic mice where the same laminin isoform predominated.

“We found that the different laminin isoforms affected whether and how fast the cells migrated outwards from the point at which the colony was originally seeded and the density at which the cells in the colony were packed,” corresponding author Ryuhei Hayashi. “These different behaviors were related to the kinds of cells that the stem cells turned into, showing that we could specifically produce an ocular cell type just by choosing the appropriate type of laminin for the targeted cells.”

The researchers then investigated the molecular mechanisms behind these different behaviors. They found that the form of laminin that gave rise to colonies with four concentric rings caused the contraction of extracellular structural scaffolds that tether cells together, producing higher-density colony centers. This in turn led to the inactivation of a protein called YAP, which promoted the differentiation into retinal-like cells in the colony centers. 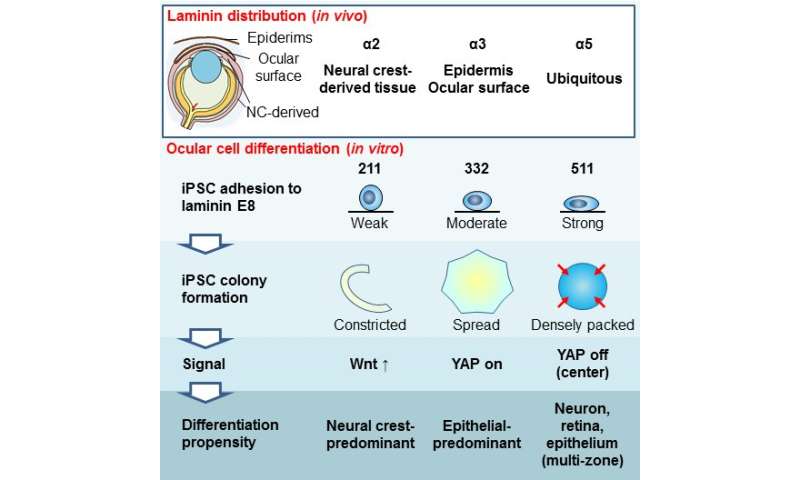