Glycosylation is a critical protein modification process that is dependent upon the presence of different sequons. 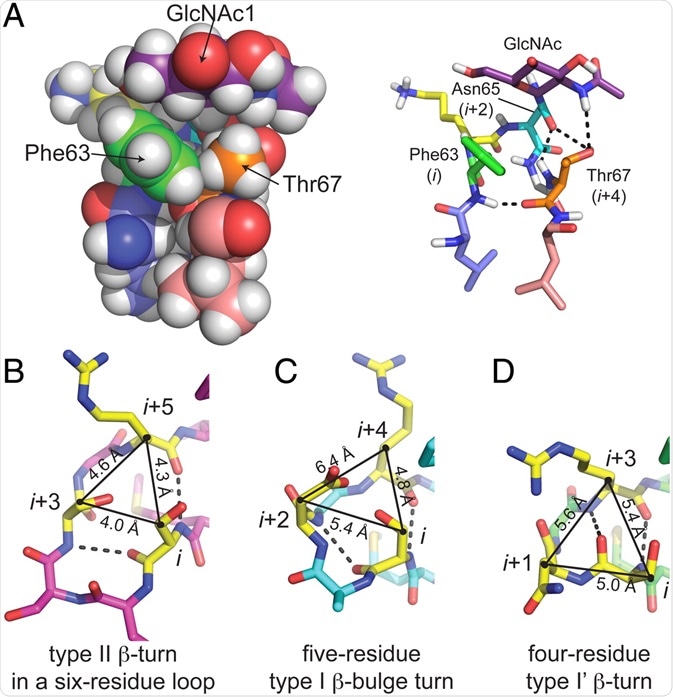 In 1974, the term ‘sequon’ was first used by Derek Marshall to describe the three amino acid sequence required for N-glycosylation. Since its discovery, several different research initiatives have determined the importance of the asparagine (Asn)-X-serine (Ser)/threonine (Thr) sequon, in which X represents any amino acid except for proline.

The presence of either Ser or Thr in this position has such a strong influence on the efficiency of glycosylation that it has been referred to as the ‘glycosylation sequon.’

Glycosylation is an extremely common process that functions as both a co- and post-translational modification of proteins.

Like many other protein modifications, glycosylation plays an important role in the regulation of a wide variety of biological processes and cellular functions, some of which include the proliferation, differentiation, recognition, and migration of cells, cell-cell integrity, host-pathogen interactions, and immune response modulation.

A small set of simple monosaccharides can be used as a template for the formation of numerous glycans, which are typically linked to glycoproteins through N- or O-glycosidic linkages.

N-glycosylation, which occurs on asparagine-linked proteins, is a crucial post-translational modification process that occurs in the proteins of eukaryotic, archaea, and certain bacteria cells.

More specifically, N-glycosylation plays an important role in the regulation of protein function and protein folding. Within the lumen of the endoplasmic reticulum (ER), the enzyme oligosaccharyltransferase (OTase) catalyzes the transfer of a mature glycan from a lipid carrier to a given set of Asn residues present on nascent polypeptide chains.

O-glycosylation typically occurs at the hydroxyl (OH) oxygen molecule that is present on either the Ser or Thr residue of a sequon. Once glycosylation at either of these amino acids occurs, GalNAc monosaccharides can attach to the residue through an O-glycosidic bond.

As compared to the N- and O­-glycosylation reactions that require either an NH or OH group, respectively, to be present, C-glycosylation instead occurs due to the interaction between the glycan and the CH group of the amino acid.

One of the most common C-glycosylation reactions to occur in humans can be found in the proteins recombinant interleukin-12, complements, properdin, thrombospondin, erythropoietin receptor, mucins, and bovine lens protein.

Typically, C-glycosylation will occur on tryptophan (Trp) at the 2+ position of the sequon.

Some of the different proteins that undergo this specific type of glycosylation include antimicrobial peptide sublancin 168, glycocin F, thurandacin A, and the octapeptide that is present in urine.

In urine, for example, S-glycosylation is understood to play an important role in the antimicrobial activity of the peptides sublancin 168 that are found in Bacillus subtilis.

Once OTase initiates N-glycosylation to begin, a glycan moiety gets attached to the side chain amide nitrogen of the Asn residue. This attachment is achieved through the glycosidic linkage of N-acetyl glucosamine once the Asn-X-Ser/Thr sequon is recognized.

It should be noted that even though this sequon has, for many decades, been considered to be a requirement for glycosylation to occur, over 30% of Asn in sequons present in secreted proteins are not glycosylated.

This information, therefore, points to the importance that the flanking amino acids, otherwise referred to as those in the ‘+2’ position, have in the promotion of glycosylation.

The role of flanking amino acids

Glycosylation at the non-consensus sequon of Asn-X-Cys can occur on many other types of proteins. The sequon Asn-Ala-Cys, for example, is a glycosylation site in human CD69, which is a transmembrane lectin protein that is expressed in various immune cells, of which can include, but are not limited to, T cells and hematopoietic stem cells.

Additionally, the Asn-Asn-Cys sequon plays a crucial role in the ability of cystatin F, which is a protein that is expressed on certain immune cells including T cells, natural killer (NK) cells, and dendritic cells, to target the endocytic pathway.

Typically, the glycosylation of this sequon with Cys at the +2 position will have sites that are modified by complex bi- and tri-antennary oligosaccharides that may or may not be accompanied by sialyation or fucosylation.

Recent advancements in the development of more sensitive analytical techniques have allowed researchers to investigate unusual glycosylation events that occur on a wide variety of sequons outside of the traditional Asn-X-Ser/Thr sequon.

By enabling the discovery of these novel sequons and their respective glycosylation pathways, researchers can gain a better understanding of how these numerous motifs are relevant to different cellular functions.

After completing her Bachelor of Science in Toxicology with two minors in Spanish and Chemistry in 2016, Benedette continued her studies to complete her Master of Science in Toxicology in May of 2018.During graduate school, Benedette investigated the dermatotoxicity of mechlorethamine and bendamustine, which are two nitrogen mustard alkylating agents that are currently used in anticancer therapy.