Halloween is right around the corner, but Shawn Johnson isn’t stressed at all. Mainly, because her daughter Drew’s already got it all figured out! The little girl — who turns 3 tomorrow — “appointed” her mom, her dad Andrew East, her 1-year-old brother Jett, and their dog with themed costumes this year. Her drive and initiative are a 10 out of 10! The Olympic gold medalist told SheKnows all about the family’s Halloween traditions, and her daughter’s adorable plan.

“We’re going as the Frozen cast, appointed by our daughter,” Johnson tells SheKnows. “So Drew is Elsa. I’m on Anna. Andrew’s Kristoff. Our dog is Sven the reindeer, and then Jett is going as Olaf [the snowman], which I’m so excited for.”

That is going to be amazing! As someone with a 3-year-old, I know how awesome that’ll be for Drew to see her entire family act out her vision like that (especially because next year Jett will probably have strong opinions on what costume he wants to wear).

Johnson is also preparing for a weekend of sugar and fun with Drew’s birthday party.

“We have just been so ramping up and celebrating this idea that we’re gonna get all the candy and the cake and the donuts and everything that weekend,” Johnson says. “I’m a firm believer in everything in moderation. We can’t start teaching our kids at 3-year-old, like, ‘Oh, you’re only going to get like, two pieces of candy on Halloween. You should allow your kids to be kids.”

I couldn’t agree more; although, as I was just getting through taking my own 3-year-old to the dentist during my Zoom interview with Johnson, I also know how important the “moderation” part of the conversation is. 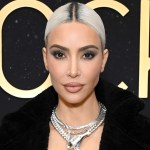 Kim Kardashian Dropped an Adorable New Photo of Her Kids Decked Out for Halloween: ‘Icons’

Johnson agreed. “We’ve also been talking about it with her,” she says. “Like she’s been asking for candy last night. And it’s like, ‘Oh, we’re gonna save that for Halloween. So we don’t get a belly ache yet.’ And just kind of associating that. We’re not going to get belly aches, and we’re gonna brush our teeth afterwards, and we’re gonna, like, do all these things that come as consequences to eating that sugar.” 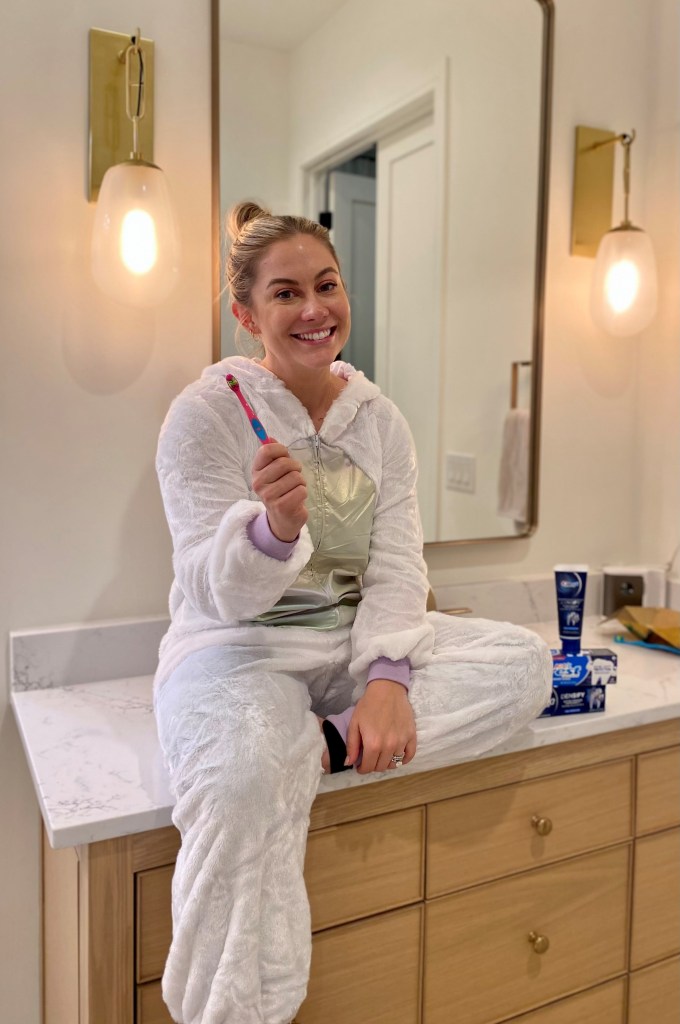 The former gymnast partnered with Crest to beat the Halloween Eve Sunday Scaries to help other moms keep their kids’ teeth clean this treat season. She has a few hacks from her pediatrician that she uses to keep her toddlers’ teeth healthy and cavity-free, even when they don’t like brushing.

“They don’t really like to brush their teeth, but they do like to use an electric toothbrush,” Johnson tells SheKnows. “So like they chew on it a ton while it when it’s like buzzing and they like it. We’ve been taught by our pediatrician that even if they’re chewing on it, they’re doing a lot more than you think.”

She also talked about the frustrations that come with getting your kids to brush (something I am very, very familiar with). “It’s one of those parent things where you have so much like impatience building inside of you, you’re like, ‘just open your mouth, just open your mouth,’” Johnson says, laughing. She also revealed she has to keep the tube of toothpaste away from her curious 1-year-old “because he’ll drink it.” Ah, the challenges of mom life.

But every tip helps, so Johnson gladly shared them all with me. Like the fact that they read books while brushing teeth to make it more fun. And to make it more effective, they make sure the toothpaste goes deep into the bristles, which “makes it so they have to actually chew on it to taste the toothpaste.” Genius, right?

They also let their kids brush their teeth to make it more fun. “Our 3-year-old, more than our 1-year-old, has had more hesitation around brushing her teeth, and so we would let her brush our teeth,” Johnson says. “Truly leading by example has been the best for us. I think we forget so much as parents that it’s all it seems normal to us, but it’s so it’s so new to them.”

She may have a little hesitation around brushing her teeth, but Drew is full steam ahead when it comes to Halloween plans.

The family also likes going to the pumpkin patch, and this year, they painted pumpkins instead of carving them to keep things a little cleaner at home. Now, Johnson is making plans to bake her famous apple recipe.

“I’m actually getting ready,” she says. “One of my favorite recipes that I make is a homemade apple pie, but we smoke it on the smoker instead of bake it in the oven. So like a like a grill smoker. And it’s amazing. I saw the Honeycrisp apples were looking amazing, so I’m planning.”

Of course, she’ll have one little helper in the kitchen. “Drew is really in the helping phase now, where she wants to be immersed and actually help and not destroy,” Johnson says.

As for Jett? He’ll probably stay far away from the kitchen. “Our son is not in the helping phase. He is in the destroying phase,” she laughs. “But it’s a lot of fun.”

Like many moms, Johnson struggles with managing her “perfectionism” when it comes to her kids.

“It’s like every single decision you make on a daily basis, you second guess,” she continues. “And you’re like, ‘Am I making the right decision for them? Am I messing them up long term?’ It’s just like that fear that you’re not doing it right, when we’re always doing it right if we just love them.”

Johnson also loves seeing the friendship her kids have. “I think one of my proudest moments has been seeing Drew and Jett love each other so much,” she adds. “And I can’t even claim that as a motherhood moment. That said, I had a part in it. It’s just being a mom, being able to witness that. I’m an only child, so seeing that bond between them already is really, really special and that makes me really happy.”

It’s truly the best! I’m going into Halloween weekend with Johnson’s teeth-brushing tips in mind and a renewed focus to let my kids be kids, enjoy a little candy, and have a blast trick-or-treating. I’ll also be on the lookout for pictures from Johnson’s Frozen-themed costumes … because that is going to be adorable!

Before you go, check out these tasteless Halloween costumes for kids.