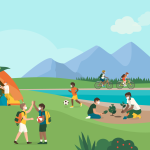 What You Need to Know About Summer Camps This Year

“Sex really was not interesting for me at all this time around,” Duff told Dr. Elliot Berlin for a post-birth edition of the Informed Pregnancy Podcast. “So toward the end, where with Banks that felt like a really helpful-slash-fun tool, this time I was like, ‘Nope, not for me.’ It annoyed me majorly when people would say, ‘You know what really gets things started?’ I’m like, ‘Nope!’”

Duff and singer/songwriter husband Matthew Koma welcomed their second baby together on March 24 in a home water birth, with help from a midwife and doula team. Duff and Koma are also parents to 2-year-old daughter Banks Violet, and Duff shares 9-year-old son Luca Cruz with ex Mike Comrie.

“Poor Matt,” joked Duff of her lack of libido during her pregnancy with Mae, “but maybe not. Maybe he was like, ‘This is for the better right now.’”

Based on this stunning shot of a pregnant Duff just days before giving birth, we doubt that.

Duff originally attributed her reduced sex drive to being pregnant with another boy, but that was just a red herring.

“I thought I was having a boy because with Banks I was totally down, and with this baby, I was like … I don’t know if it was maybe having more kids and trying to keep up with everybody that just made it kind of at night feeling exhausted and just really not a ton of time,” Duff told Berlin. “I felt like a little more protective of my body this time around.”

Being a busy working mom was also to blame for Duff not sharing a photo of baby Mae until a week after she was born.

“Most people post this on the first day….. but you’re a 3rd child Mae Mae …. soooo it’s happening on the 7th,” joked Duff in the Instagram caption of Mae’s debut on social media.

In the podcast, Duff also told Berlin about Mae’s birth, which happened in a short three hours and nine minutes.

“I was laughing at the way it was going down, because people were having to scramble to get home,” she said. When contractions got super intense she “gave one big, growling push, and the baby was out.”

Duff also shared she is feeling great after becoming a mom of three. “I think this has been my easiest one, my easiest recovery,” Duff said.

These celebrity moms make us all feel better when they share the highs and lows of parenting.