It was in the early 19th century that an enterprising English ship captain took a group of Indian entertainers to England, where they stunned audiences with their juggling, balancing, sword-swallowing and other tricks. (This is part of the series Make History Fun Again, where the writers introduce historical facts, events and personalities in a fun way for parents to start a conversation with their kids.)

From ancient times, India was known as the land of exotic beasts and unbelievable sights, the land of fakirs and jadugars, of monsters and marvels.

People around the world gasped when they heard fantastical tales about snake-charmers and illusionists, juggling and live burials; one Indian embassy sent to Emperor Augustus included an armless boy who could shoot arrows with his feet!

A lot of these tales about India were exaggerated or simply untrue (for instance, when an ancient Greek doctor called Ctesias spoke of Indian men who had dog’s heads), but ancient Indians had also perfected illusions and sleights of hand to deliver spectacles where you couldn’t believe your own eyes.

The crazy legends of India where anything could happen continued to grow. It was in the early 19th century that an enterprising English ship captain took a group of Indian entertainers to England, where they stunned audiences with their juggling, balancing, sword-swallowing and other tricks. This set off a craze in Europe and America, and many Western magicians started pretending to be ‘Hindu fakirs’, darkening their faces and performing these tricks to sold-out shows. In fact, even the famous escape artist Harry Houdini started off like this in Chicago in 1893!

Many of these insane Indian magic tricks originated thousands of years ago, practiced by Hindu ascetics who used them to show the public that they were connected to the gods and could do the impossible. Here are some famous Indian stunts – and, if you want, you can scroll down to the end to see how they worked. (But do not try this at home, just don’t!)

This heart-stopping feat is thousands of years old, where performers swallow a naked sword down to their stomachs, and out again. The more talented could take in multiple swords at the same time…the current Guinness Book of World Records holder has swallowed 24 swords at once!

Sword swallowing spread from India to ancient Greece and Rome, then to China in the 8th century and to Europe in the early Middle Ages, becoming a staple magic stunt around the world.

Fun fact: The first endoscopy in the world was performed on a sword-swallower in 1868, as he was the only one able to swallow the tube without retching!

Fire-eating was first performed by Hindu sadhus in ancient times, who gulped and blew out fire with equal ease, and even walked on red-hot coals to show that they had mastered their bodies completely.

The sight of people inserting flaming torches into their mouths and emerging unscathed was something people never forgot! 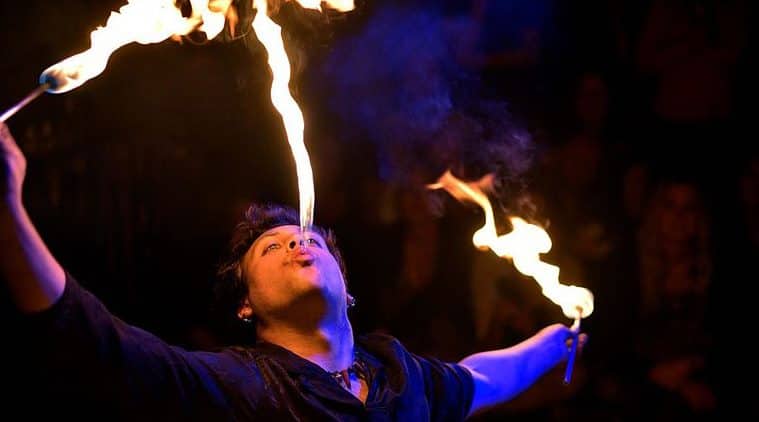 Fire-eating was extremely common all across India, and could be found in the simplest of village fairs and road-side entertainment.

Who hasn’t seen the iconic images of barely-dressed Indian sadhus lounging non-chalantly on a bed of nails, looking relaxed, or perhaps meditating intently? This unbelievable sight was enough to convince most viewers of the holy man’s direct connection to the divine.

This trick was called ‘the world’s greatest illusion’. It involved a performer going outdoors, uncoiling a rope and throwing it in the air. The rope magically became stiff and straight and seemed to vanish into the sky, upon which a young boy would climb up and also disappear from view! This trick puzzled professional western magicians in the 19th century who even offered large rewards of money for demonstrating this at a place of their choosing.The rewards were never claimed, but the fascination with this most Indian of stunts continued for decades across the world.

This was another gasp inducing stunt, which stupefied viewers. The performer’s young assistant was covered with a cane basket, after which the performer trampled on it most thoroughly, before stabbing it repeatedly from various angles. The assistant would then either climb out of the basket, completely unhurt, or appear suddenly in the watching crowd! Here’s the secret behind these tricks.

Sword-Swallowing: Sword-swallowing is actually dangerous! Swallowers have to completely relax their throats, so that the throat becomes a living scabard. They straighten their throats by extending their chin high up, and the sword gently nudges organs out of the way as it goes down, placing them in a straight line. One little distraction and there can be serious injury!

Fire-Eating: Performers don’t really eat fire, they extinguish flames…using their mouths! In this potentially hazardous stunt, performers use the principle that heat travels upward to their advantage. They tilt their heads back and down, and as they lower the flame towards their mouths, they exhale, which keeps the heat away. They place the wick onto their tongues and close their mouths in a large ‘o’ shape, usually using a short exhaling breath to extinguish the flame (which is often fuelled by quick-burning alcohol). Then of course, there are many variations that have developed over the centuries.

Lying on a Bed of Nails: If a body is laid flat on a bed of numerous nails that are exactly the same height, the pressure of the nails is distributed evenly and doesn’t pierce the skin. The density of nails required depends on the size of the body – a smaller body will require more density than a larger one! The principle is similar to the way that a pointy, high-heeled shoe exerts more pressure on the ground than an elephant’s foot, because there is more surface area on the latter.

The Indian Rope Trick: This was not a rope trick at all; it was a balancing and illusion trick! The ‘rope’ was hollow, with interlocking bamboo poles inside, which were pushed up through a hole in the ground by an accomplice in a hidden chamber below. As for the boy disappearing, the trick was usually performed at midday, when the brilliance of the sun caused the viewers to be temporarily blinded, and allowed the boy to get away.

The Indian Basket Trick: This is a simple illusion trick. The child would coil himself around the sides of the basket, so that when the magician trampled and stabbed the middle of the basket, he remained unhurt. The sword was put through pre-arranged parts on the sides, so as to go between the gaps in the legs, the gap between arm shoulders and neck, etc. The boy who suddenly re-appeared in the crowd was actually a different person.

(For more fun journeys through India’s history, check out the recently released two-volume set, The History of India for Children Vol. 1 and Vol. 2, published by Hachette India. Follow on twitter @shrutigarodia_)