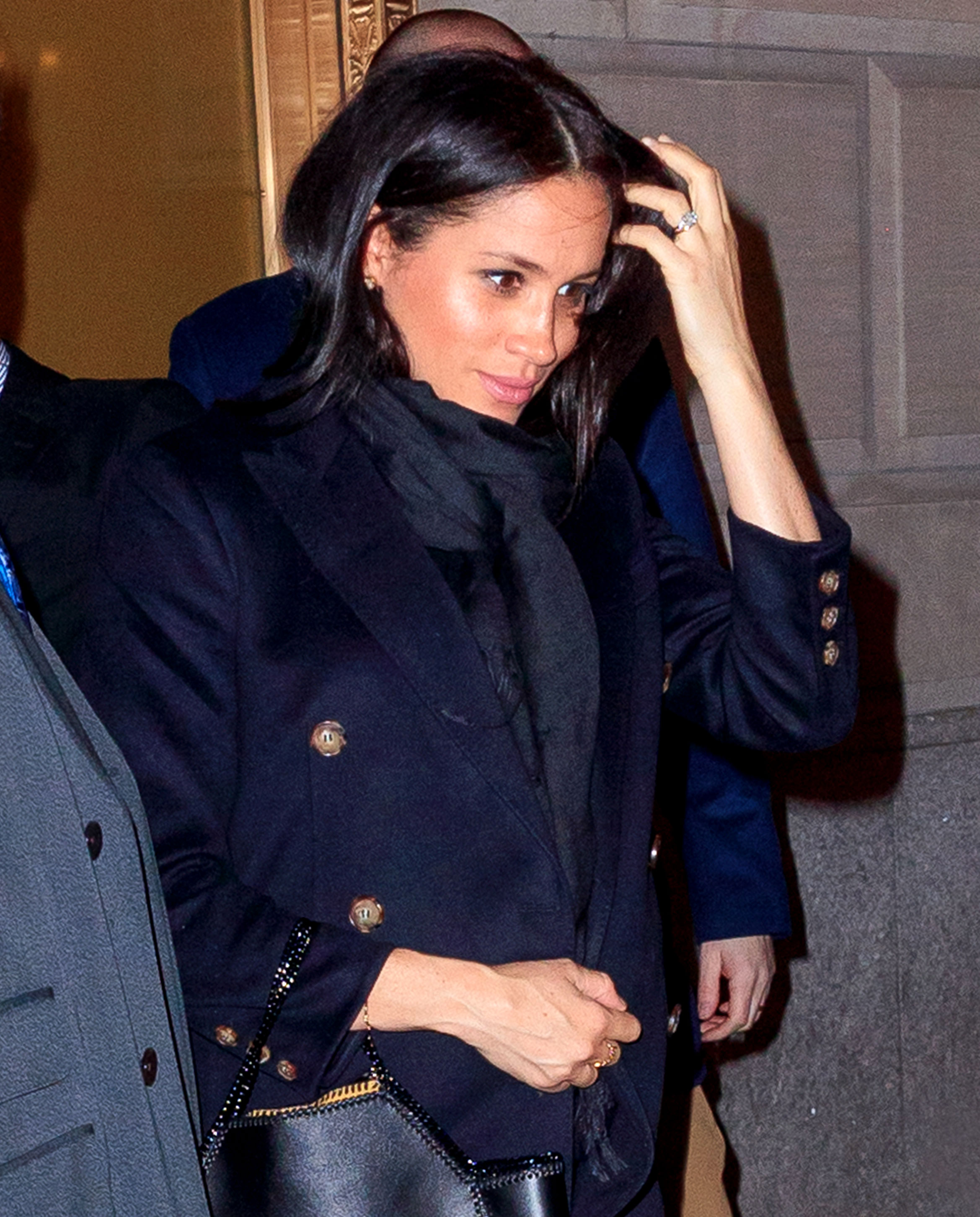 The event took place at The Mark Hotel on Wednesday, February 20. While some believed the shower would occur the day prior, a source confirms to Us that the Duchess of Sussex, 37, celebrated her impending arrival with a series of events, including lunch at The Surrey on Tuesday, February 19, followed by tea and a reunion with pals at The Polo Bar.

Amal Clooney, Gayle King, Jessica Mulroney and Lindsay Roth were among the attendees: “There was a hotel manger with a big umbrella opening the doors of all the guests and walking them into the hotel.”

Jean-Georges Vongerichten handled food and desserts for the morning shower, while an eyewitness spotted a harp being delivered for the soiree. “There were cotton candy machines being brought in earlier this morning,” an insider reveals. “The same security who has been escorting Meghan in and out of the hotel was helping bring them in the side door.”

“There were floral arrangements being brought in on a rolling dolly in all the colors of the rainbow,” another onlooker tells Us exclusively. “Blue, white, pink and purple hydrangeas, craspedias, yellow and pink roses, and many others that are covered up.”

Security was on guard at the event, according to the second eyewitness. “There are around 80 to 100 fans and paparazzi waiting behind the barricades all around the front entrance of The Mark. The security is walking around the barricades of fans, paparazzi [and] journalists looking at everyone,” the onlooker notes. “A fan told me someone with a T-shirt pulled over her face yelled something at Meghan yesterday. … Since then security has been tighter around the fans outside checking them out whenever they walk around.”

Another fan arrived at 6 a.m. to see Meghan ahead of the shower. “I’m just a huge Meghan and [Prince] Harry fan and I was in visiting a friend from Austin, Texas, and wanted to see Meghan and wish her well,” she tells Us.

Us exclusively confirmed on Monday, February 18, that the Suits alum traveled to New York. She was spotted eating lunch at Ladurée restaurant and bakery in the SoHo neighborhood of Manhattan on Saturday, February 16, and shopping at children’s store Bonpoint.

The former actress told well-wishers in January that her baby is due in late April or early May. She also revealed that she and Harry, 34, plan to keep the little one’s sex a “surprise.”

With reporting by Brody Brown and Travis Cronin