No holiday in the extended Kardashian-Jenner family is complete without a creative, opulent display! Kim Kardashian’s oldest child, North West, gave her social media audience a behind-the-scenes look at the family’s 2022 Thanksgiving spread via a new video posted to the mother-daughter-duo’s TikTok channel.

In the clip, North gives a tour of the family’s setup in brief glimpses. First, we see a number of tall, appropriately autumnal-looking pillar candles in tall hurricane vases set up at Kim’s house. Next up, is a peek at the orange-themed dinner arrangements, with calligraphy-adorned place settings and a lavish floral creation running down the middle of the very long table.

The video then transitioned to a scan of what was perhaps the most over-the-top feature of the holiday gathering, a wall full of what’s being called the family’s “royal portraits.” Kim commissioned paintings of each family member, with her relatives all depicted wearing old-fashioned, regal ensembles and powdered-wig up-dos. Both Khloe and Kylie were shown holding their newborn babies, and their mother Kris was even wearing a crown.

North’s videography moved on to the dessert table, which was a feast in its own right — if anyone had room after the main meal! There were multiple pies, a range of different kinds of donuts, and even a DIY s’mores bar with marshmallow options. In a later video, North showed a s’more being put together, and gave a closer look at the gluten-free graham crackers and vegan chocolate on offer.

Kim and North have been spending a lot of time on their joint TikTok project, and it’s been a sweet glimpse into their lives beyond what is pictured on their Hulu show The Kardashians. The last week alone has given fans a look at Kim and North at a Lizzo concert and even North and her cousins doing aunt Kylie’s makeup. Instagram, however, seems to be Kim’s social media platform of choice; she still turns to Instagram to share sweet family pictures like a set of her youngest kids, Psalm, Saint, and Chicago, snuggled up together in bed.

It looks like Kim was the lucky relative to host the extended family for Thanksgiving, but Christmas Eve is known to be matriarch Kris’s special day. The family is just a handful of weeks away from Kris’s iconic Christmas Eve party, and we’re sure plans are well underway to make it as unforgettable — and opulent! — as Kim’s Thanksgiving. 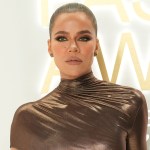 In fact, Kris opened up to InStyle recently to reflect on her approach to party-planning. “Planning a party is never a simple task,” she said. “Before doing anything, I always want to sit down and figure out what the theme is, what dress code we want, and how to make it fun for my kids and grandkids.”

Before you go, check out all the times North West proved she’s a star in her own right.