The time has come! Duchess Meghan and Prince Harry welcomed their royal baby on Monday, May 6, and their newborn’s arrival was announced on an easel outside of Buckingham Palace that same day. 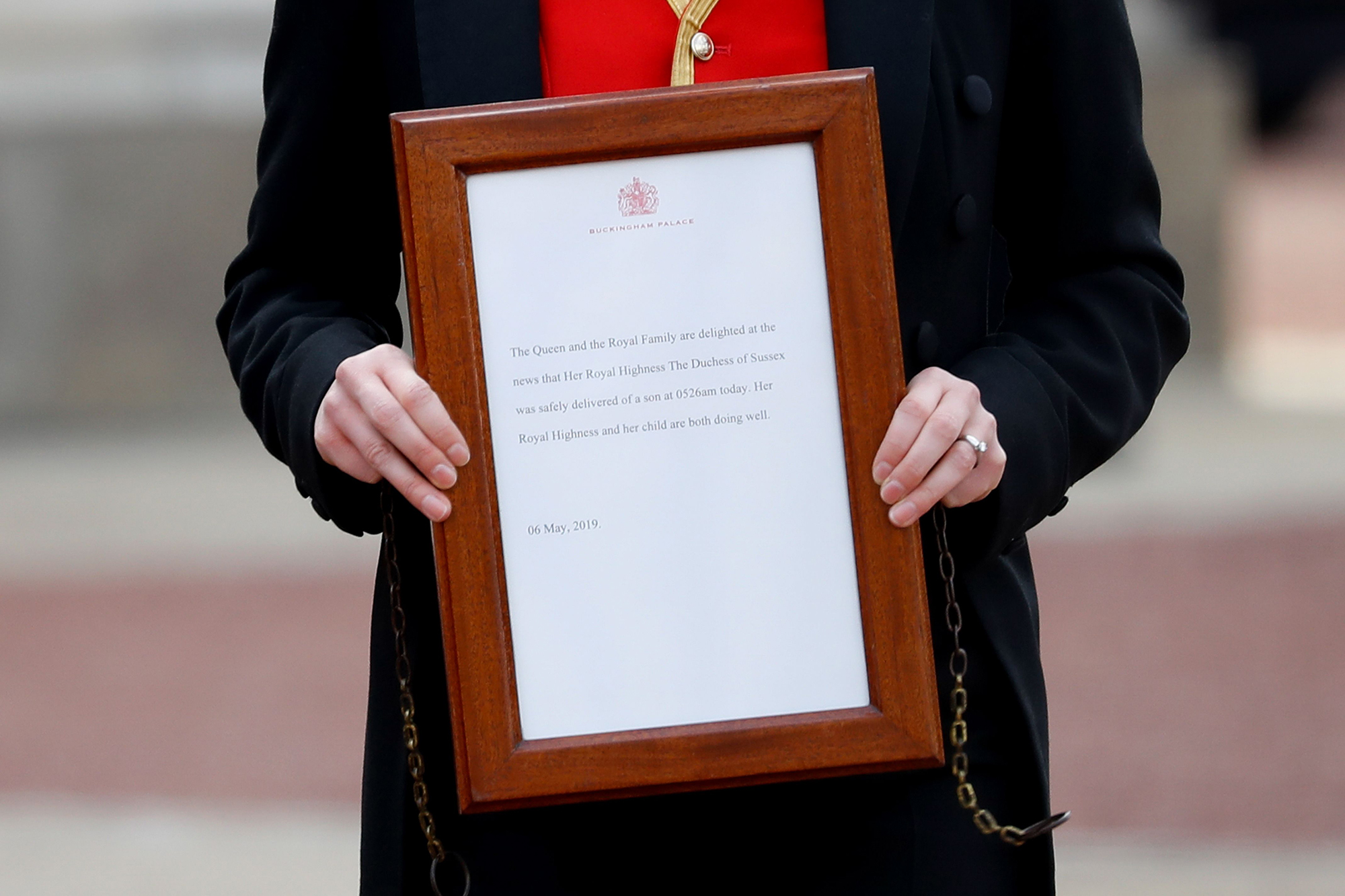 “The Queen and the Royal Family are delighted at the news that Her Royal Highness The Duchess of Sussex was safely delivered of a son at 0526am today,” the notice read. “Her Royal Highness and her child are both doing well.”

The long-standing royal family tradition honored the Duke and Duchess of Sussex’s first child. Just as when Duchess Kate and Prince William welcomed Prince George, Princess Charlotte and Prince Louis, a framed notice of Meghan and Harry’s infant is on display outside of the Queen’s residence.

This traditional way of announcing a new addition to the royal family includes a piece of paper stating the date and time of the little one’s birth. The bulletin is carried from the Privy Purse Door and across the forecourt at Buckingham Palace before it is placed on the ornate golden easel.

Meghan, 37, and Harry, 34, first revealed the news with an Instagram post. “We are pleased to announce that Their Royal Highnesses The Duke and Duchess of Sussex welcomed their firstborn child in the early morning on May 6th, 2019,” the social media statement read. “Their Royal Highnesses’ son weighs 7lbs. 3oz. The duchess and baby are both healthy and well, and the couple thank members of the public for their shared excitement and support during this very special time in their lives. More details will be shared in the forthcoming days.”

The couple confirmed that they were expecting their first child in October 2018, five months after tying the knot.

“Their Royal Highnesses The Duke and Duchess of Sussex are very pleased to announce that The Duchess of Sussex is expecting a baby in the Spring of 2019,” Kensington Palace tweeted at the time. “Their Royal Highnesses have appreciated all of the support they have received from people around the world since their wedding in May and are delighted to be able to share this happy news with the public.”

The former Suits actress went on to reveal her due date in January 2019. While speaking with locals in Birkenhead, England, Meghan told the well-wishers that she was six months along and due in late April or early May.

In addition to embarking on a royal tour one day before her pregnancy announcement, Meghan traveled far and wide while expecting her little one. The Los Angeles native flew to New York City in February 2019 to celebrate a star-studded baby shower with Serena Williams and Amal Clooney, among others, and she jetted off to Morocco with her husband shortly after.