For the past 15 years, Beth James has repeatedly heard of all the things her daughter Liza would be unable to do after sustaining a severe brain injury in a car crash. She would never walk or speak, and she couldn’t eat or bathe without assistance. But Beth wouldn’t let the “can’ts” define her daughter’s future, and, on October 12, “Team Liza” is set to make history by becoming the first mother-daughter duo to compete in the Ironman World Championship in Kona, Hawaii.

A 140.6-mile triathlon is a daunting feat for any athlete, and Beth has the added challenge of including 23-year-old Liza in the competition’s 2.4-mile swim, 112-mile bike ride, and 26.2-mile run. Though challenging, the world-renowned race is nothing compared to the adversity the James family has endured. In 2003, just one year before the traumatic accident, Beth was diagnosed with brain cancer. Later, doctors determined she had a non-cancerous tumor and successfully removed it before it grew. To cope with the overwhelming life changes, Beth, who competed in first Ironman in 1999, once again got serious about competing in races, from 5ks to marathons, with a new motto: “Charge forward; here we go.” But it wasn’t enough to hit the trail alone; Beth wanted Liza, who used to love accompanying her mom on runs, to be part of the adventure.

“Personally, being active is just a natural part of my every day, especially after such a serious health scare,” Beth told SheKnows. “I’m thankful and don’t want to let another day go by [without living to the fullest]. Liza is number one, and not only do we want to give her beautiful love and care at home, but we also want her to be active and see new things, do new things, and meet new people.” 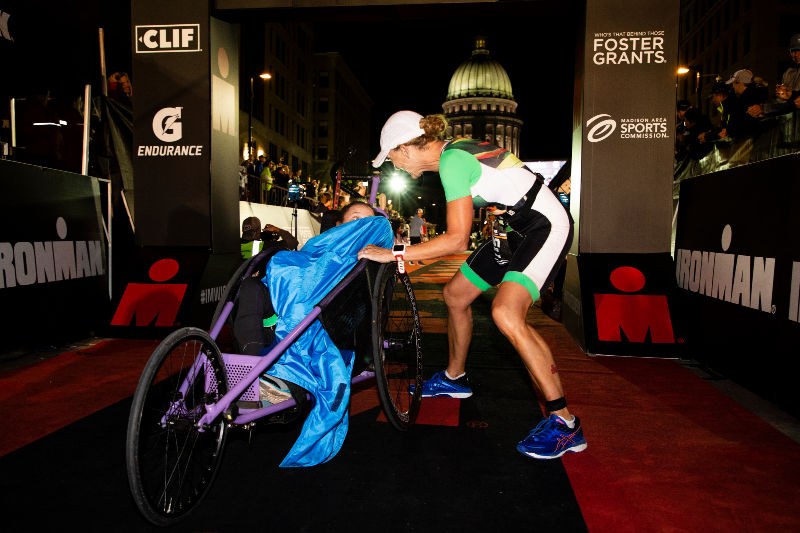 Liza had a new zeal for life, and the family quickly realized that her so-called limitations didn’t prohibit her from living an active lifestyle. Today, Beth says Liza loves swimming, biking, running, and cross-country skiing. She’s also an active member of the Adapted Sports Center, a Colorado-based nonprofit that takes people with a variety of disabilities on a wide range of outdoor adventures, including snowboarding, biking, ice climbing, and water rafting.

“Even with the traumatic brain injury, [Liza] is very healthy and happy. So healthy it’s scary,” Beth said.

While the family makes plenty of time for play (Liza also loves the library and her family’s hot tub), they’re devoted to training year-round. Beth exercises between 4-10 hours daily: once in the wee hours of the morning, and again at night after work with Liza. It’s a tedious schedule, but it’s necessary for the physically demanding competitions. Unlike other Ironman competitors, Beth has to account for both Liza’s weight and the weight of her adaptive equipment she pushes and pulls. Each leg of the race is tough, but, for Beth, “the bike segment is the most difficult,” while also being her “favorite part of the competition.” “I’m not only [responsible] for myself and my bike, but also a 21-pound racing chair [from Adaptive Star] and Liza, who weighs 105 pounds,” Beth added. 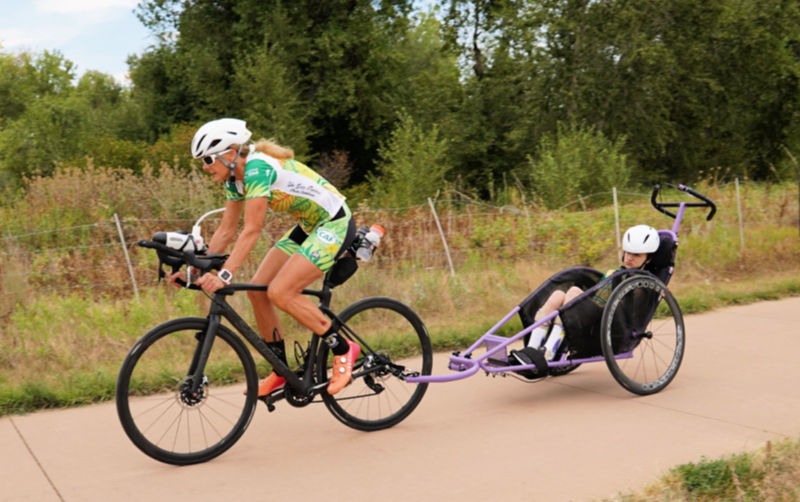 Though certainly trailblazers, Beth noted that Team Liza has had a lot of support, including a sponsorship from the Challenged Athletes Foundation and Vega, Ironman World Championship’s title sponsor. Of course, financial support is only one factor; Beth has also relied on the kindness and wisdom from Richard “Dick” Hoyt and his disabled son Rick, who participated in dozens of competitions as “Team Hoyt” for 25 years, and whom Beth had long admired. After the accident, the famous father-son duo encouraged her to compete with Liza and even helped them select their first race-ready jogging chair.

“Their story touched my heart as an athlete, as a mother, and as a human,” she said. “The way that Team Hoyt changed my life, I only hope Team Liza can touch others the same.”

They’re certainly making an impact of their own. Over the past year, Beth and Liza have competed in two Ironmans: a 140.6-mile Ironman in Wisconsin last September, and a 70.3-mile race in Texas in June. In each new place, and with each mile stretch, the team’s perseverance and passion resonate with competitors and fans at home and abroad.

“It’s amazing to me that we can inspire others worldwide through social media and more, and the fact that someone from Egypt can reach out to me and explain how our story has inspired and motivated him — that’s inspiring to me,” Beth said. “Team Liza would lie to touch and motivate people to not be afraid and reach out to others, to contribute, to volunteer at a race, and to push a challenged athlete to the finish line. That’s what is beautiful at these events: when other athletes are cheering you on it gives you the feeling of true teamwork. I would like to continue that in every way.”