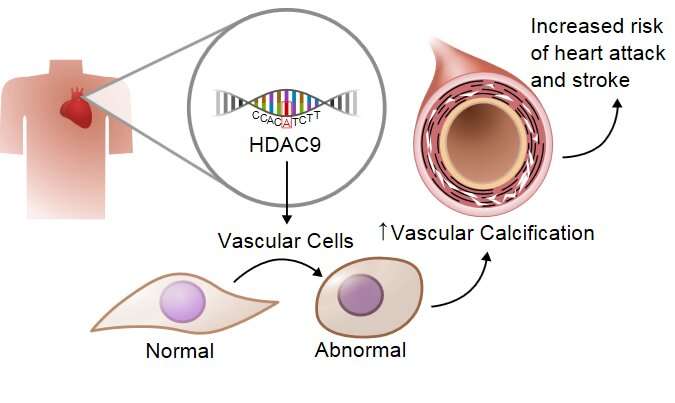 Arterial wall calcification is the buildup of calcium in the blood vessel walls, which can often be a predictor of serious cardiovascular events like heart attacks and strokes. Scientists have long pointed to family history as one possible cause for this hardening of the arteries, but a new study published in Nature Genetics implicates a specific gene—HDAC9—in the calcification of the human aorta, the largest blood vessel in the body.

The study looked at more than 11,000 people and found patients with significant blood vessel calcification were more likely to have a specific variant of HDAC9. This high-risk variant of HDAC9 is present in about 25 percent of the population. In follow-up mouse studies, the researchers also found HDAC9 caused abnormal changes in the cells of the vessel walls, resembling that of human bone cells.

“Our research proved HDAC9 is not just associated with cardiovascular disease but can actually cause it by changing the makeup of those vascular cells,” said the study’s co-lead author Rajeev Malhotra, MD, of the Massachusetts General Hospital Cardiovascular Research Center. “We then investigated it at the molecular level and looked at what would happen if we knocked out HDAC9.”

The researchers found that inhibiting HDAC9 in mice preserved normal function in vascular cells and prevented vascular calcification, therefore identifying HDAC9 as a target for the potential treatment of cardiovascular disease.